One of the reasons I ventured out on this painting trip was because of a very generous invitation from Sepi and Paul Johnson. Sepi had attended one of my portrait painting workshops at the Taos Institute of Arts two summers ago. On the second day of the workshop she approached me during the session and asked if I would like to visit she and her husband, Paul, in Dhaka, Bangladesh where they were teaching at an international school. My immediate thought was, ‘You bet’, although I politely inquired, ‘Are you sure?’ Sepi without hesitation said, ‘Yes, Paul and I want you to come. There are all kinds of painting opportunities there.’ The three of us met for lunch and the plan was set – I would go to Dhaka on a painting trip!

As is often the case with plans, the path along the way varied some from the original script. In the two years that passed, Sepi and Paul had changed their teaching post to Shanghai, China. Again they extended their invitation to come and visit with them there.

Now, I am in Shanghai.

My aim on this trip has been to paint and visit artists, art galleries and museums. This is happening here. Before writing about Shanghai from that point of view, it is well worth talking about my everyday experience of life here.

I have spent many moments thinking about what to say about this city, one of the top twenty most populated in the world. From the moment I got off the plane, to the ride from the airport, to the house where Sepi and Paul live, to the visits to the museums, art stores and galleries, to posting this weblog by means of a wireless internet connection, I have been surprised and delighted. Shanghai, China is not what I expected! 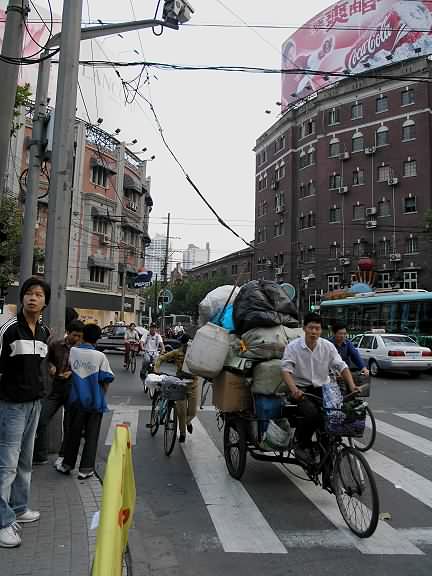 The easiest way for me to describe my experience has been is through one of the first and most persistent images I have encountered: the clash of bicycles and automobiles. A short time after leaving the airport with Mr. Wan at the wheel, I began to notice incongruity. Everywhere, along with the numerous cars, were people riding bicycles of all types: two-wheeled, three-wheeled, tricycles, mopeds, scooters, mini-bikes and motorcycles. And although many of these riders stayed to the right traffic, an equal number were meandering in all directions, swerving in front of cars, pedaling against traffic, stopping in the middle of the busy street and in general, creating what appeared to me as absolute pandemonium! The Shanghainese appeared very nonchalant about this chaos. For the entire hour-plus ride the scene continued in this way. Apparently, it was just the way the traffic works here.

What was more interesting to me about this situation however, was one peculiar fact: most of the cars were late model vehicles while all the bicycles were old, really old, machines. To say that they were ten or twenty years or even older would not be an exaggeration. Just this one observation indicated to me that some significant cultural change had been happening here. At some point many years ago, time had stopped. Now, Shanghai has fast-forwarded to the present, skipping over decades of gradual change. 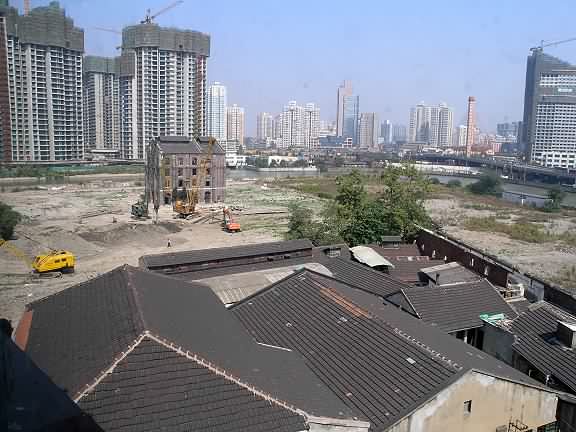 Just outside the Sezhou art district

The new catapulting into the old has been repeated in the architectural landscape. Blocks of one and two storey buildings and homes are razed to be rapidly replaced with towering apartment buildings and shopping malls. Once replaced, the evidence of any past is gone. All that remains are a few simple old buildings awaiting demolition juxtaposed with the shiny new edifices.

This is Shanghai, a city of old bicycles and brand new automobiles.

Many thanks to Sepi and Sepi Johnson for their generous hospitality. Sepi’s initiation to visit has lead me on a most fascinating journey!

Next: Paintings from the ancient city of Pingyao