I needed to pick up some art supplies before going to my next destination, Koh Phangan, Thailand. Through the internet, I found a painter,
Taveepong Limapornvanic, living in Phuket who said the best place for art supplies was either in Kuala Lumpur (KL) or Bangkok. Since KL was on the way, I chose to go there for a few days to restock. Originally I had planned to travel north from Singapore to Thailand by train, but after talking with several people, I took their advice to go by bus instead. 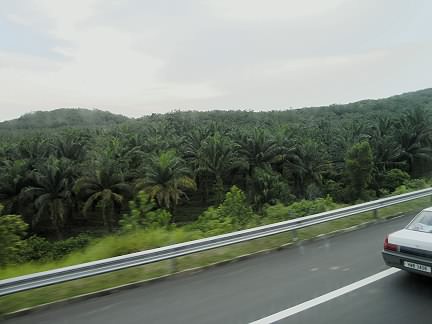 This trip to KL continued to change my notions about Southeast Asia. Once the bus had left Singapore, the countryside was mile after mile of palm oil tree plantations. Here and there, within the plantations, were small huts and buildings that appeared to be where people both lived and worked. This scene was contrasted by the ride on a brand new air-conditioned bus, where the passengers were talking on their mobile phones while being entertained by a Hollywood movie playing in English on several LCD screens. As the bus kept rolling for mile after mile down the four-lane highway divided by a median of colorful flowers, I began to notice more contrasts to the run-down huts. There were Mercedes, Nissans, Toyotas, mobile phone towers, and billboards advertising everything from Subarus to Shell oil to brand new homes in the outskirts of KL, and finally, some distance south of the city, an amusement theme park that included tall water slides. Where was I, anyway?

When I arrived in KL, the contrasts continued. The bus stopped near a new high-rise hotel. Within walking distance, I could see the KL Towers (KLCC), the tallest in the world. I decided to walk there to get money exchanged to ringgets. The streets were full of taxis and crowded and the air smelled heavily of exhaust fumes. On my way I noticed, there were less well kept older buildings between the newer hotels. Then came the towers. They were brightly lit steel and glass structures that spoke of an enormous investment of money. 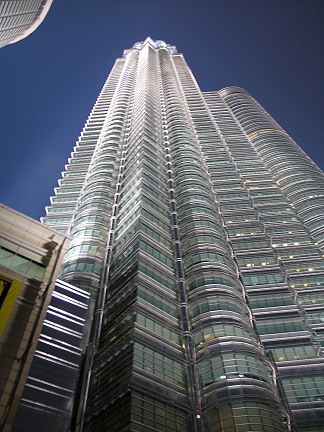 I entered KLCC ground floor, which was a shopping mall – a high-end shopping mall. Gucci, Nike, Bulova and similar brand stores were here. The familiarity of these icons was offset by women wearing full chadors pushing their babies in denim covered jogging strollers accompanied by their husbands wearing tight t-shirts sporting Von Dutch logos. And there were teenagers with tattoos, piercings, mid-riff shirts and super tight fighting Levis. As I walked a little further inside, a young woman from the Tommy Hilfiger store approached me, asking in English, ‘Would I like to try Tommy’s latest cologne?’ ‘Sure, why not? Can you tell me where there is an ATM.’ ‘Oh, yes, just over there on the right.’

On the short taxi ride from KLCC to the hostel where I was staying, the driver took me by the club area. From each one I could hear the music blaring the Doors, Groove Armada, Ibiza Chillout and Norah Jones. On one corner was a Spanish band performing Flamenco. And the sidewalks were filled with crowds of people just as I had seen in the mall. Quickly, the buildings here were older, less kept-up, the sidewalks dirtier and street vendors were everywhere.

It appeared that change had happened quickly in Malaysia. What would the art be like here, I wondered?

Next: Art in Kuala Lumpur