The Visit with Takeshi Uemura

The following morning, Jason called Mr. Uemura’s office. He agreed to meet with us for a short time in the afternoon at his office in Kyoto. We made our way there by train and bus, where Uemura met us at the stop and lead us to his office. He and Jason immediately began conversing in Japanese. We entered his office, which turned out to be his printing studio. 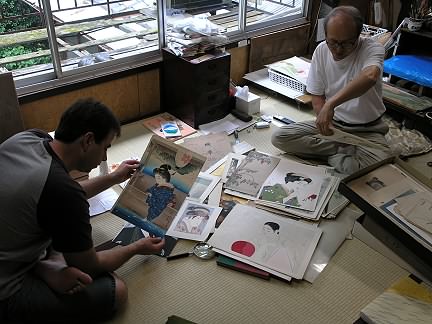 Initially Uemura showed us a few of his original prints. As Jason translated, I learned that Uemura is the last in a line on wood block printers. His father and grandfather had been doing this at a time when many people were involved in making prints of all types from the Ukiyo-e prints to book liner paper. It is now the end of this era. No one is making wood block prints of the type that Uemura and his family once made. Of the future, Uemura’s comment was, ‘We don’t know.’ 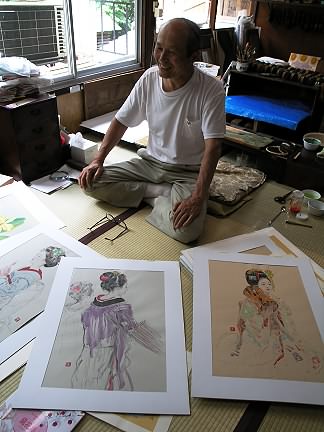 As we looked over all of his work, I was amazed at the level of quality and attention to detail in them. The fineness of gradation was almost invisible. This was particularly noticeable in one set of prints where the original art was a watercolor painting of a woman in kimono. It was hard see that the print was not the original. We were told about the variation of application of ink on paper and how he had always looked for new and better ways to apply the inks. In one example, he had figured out how to make a paste from seaweed with which he was able to control the saturation of the ink.

In another print of a woman peering into the night sky, I noticed the absolute control of the subtle value change across the background. Uemura commented that the background can be the most difficult part to of the process. I smiled when I heard this. Indeed, backgrounds can be the most difficult in painting as well. In order to achieve this particular background, Uemura had at night projected the light of the full moon onto the paper. From this, he was able to approximate the lighting effect using ink that was made from crushed pearl.

Uemura kept getting up and leaving the room return with yet another large box of prints. The stacks on the floor kept growing. By the time we looked up, our short visit had been over two and one-half hours long. We had a train to catch for our return to Sano-shi, so we bade farewell and were graciously invited by Uemura to come back and visit again. 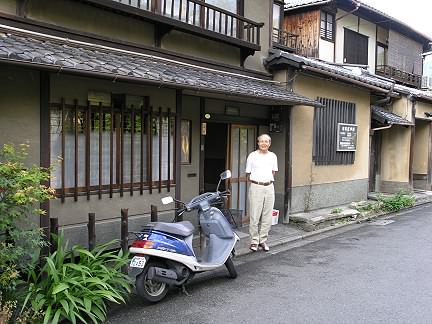 Many thanks to Jason, without whom I would not have been able to meet learn about Takeshi Uemura. And many thanks to Uemura for his kind invitation to visit.

Next: The Last Painting in Japan – a Portrait of Jason Kelly