The Unexpected Meeting at the Kamigata Museum

Jason and I decided to take a weekend trip to visit art sites in Kyoto and Osaka. We met with a friend of ours, Atsuko, with whom we had traveled through Europe in 2001. Atsuko was our tour guide and led us through several of the more known sites including Kinkakuji and the Ryoanji Temple: 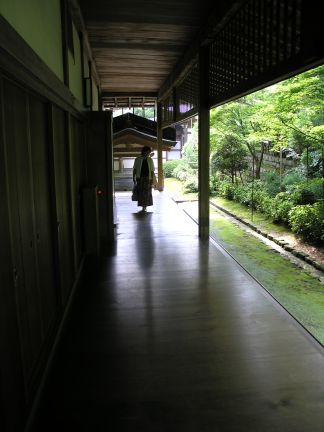 While it was nice to see these more known destinations, I was more interested in seeing art. Fortunately, Atsuko and Jason had seen these places several times before and so we switched the focus to the art museums.

Our visit the next day included a stop at the Osaka Museum. To be honest, the museum was unimpressive. We took a break for lunch and I contemplated why I had come all the way to Kyoto and Osaka – it was a long train ride and it was hotter here. Fortunately, the situation was about to change.

I had been very interested to see the Japanese wood block prints in the Kamigata Museum. During college, I had studied these prints in some detail and was looking forward to seeing them firsthand. We proceeded to the museum, and indeed, it was enjoyable to see and learn more about these classic works of Japanese art.

Then came the unexpected.

The three of us were taking a break on some tatami mats in one of the exhibit rooms, when a woman in a kimono came and asked if we would like to go upstairs to meet with some artists. I was up in a hurry! We got to the top floor and were invited to take off our shoes and join a group people sitting on the floor poring over a number of wood blocks and wood block prints. 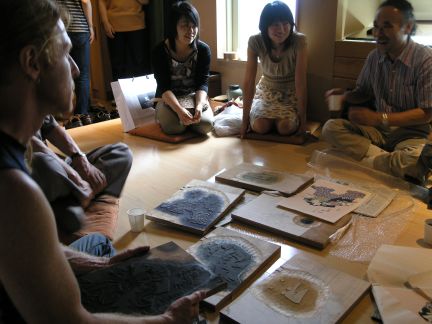 Jason began translating the conversation. One of the artists we were sitting with carves the wood blocks and another one makes the prints. These two people are the last remaining wood block printers making these traditional works in Japan and, quite likely, in the world! They had come to Osaka that afternoon to visit the museum in Kyoto and we happened to be there at the same time. Was I astounded? Very much so.

We spoke about art and lost traditions and heard more about the process of wood block printing. Several of the blocks we were looking at were sixty-five years old. There was a time when many families and generations of families were involved in this work. Now, it had come down to these two. “No one is interested anymore,” we were told.

We continued the conversation over tea and after some time had passed, the group got up to leave. My attitude had changed. Good thing I had come to Osaka after all. ‘A good day,’ I thought.

Then it got better.

The three of us headed downstairs. Outside, we met the printers again. While Atsuko and I spoke with one of them, Jason spoke with the other. When we finally parted, Jason informed us that Takeshi Uemura, the fellow with whom he had been chatting, had invited us to come and see him at his studio in Kyoto.

Next: The Visit with Takeshi Uemura