In Singapore, I continued my travel plans to visit art museums and galleries while staying in the cities. First stop here was the Singapore Art Museum. It was the oldest and smallest collection of any museum so far on this trip.

There were some Chinese brush paintings, including work done by an artist working with his finger and fingernail, as well as some modern art work. Other than that, it was pretty much uninspiring. The art galleries had more varied and interesting artwork. Artists from the region had made most of the art; however, just like in Hong Kong, it was influenced by work from around the world, rather than specifically from this area. 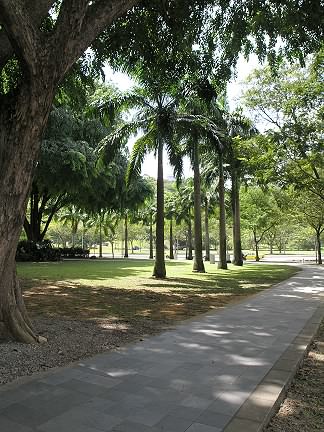 The limited selection art in Singapore was offset by the artistry of the city itself. Singapore is the most clean and carefully planned city I have visited. Walkways and footbridges followed the meandering river for miles through the city. Most of the streets were tree-lined and clean. The planning was so thorough that each block contained everything for city living. So in every block, not only were there restaurants and convenience stores, but also housing, parking, grocery and clothing stores. It made it very easy to walk for a few minutes to find most necessities.

The city also showed the huge influence of the west. The influence of England, and now the United States, was everywhere. English language predominated, colonial architecture was common and KFC, McDonalds and Levi’s were everywhere. It has a little bit odd to be so far away, and at the same time, not to have experienced a very foreign environment.

Next: Traveling to Kuala Lumpur