Before I left Taos, Jan Mellor had given the name of a travel writer, Andrew Leung, who lives in Hong Kong. Andrew had visited and written about Taos last year. I was staying in Kowloon, which is immediately north the main Hong Kong Island where Andrew lives. I had emailed him a couple of times and hadn’t heard anything so guessed he must have been away on assignment. As it turned out, he had been away, but got it touch with me two days before I was scheduled to go to Singapore. Andrew offered to meet with me and give me a tour of Central.

Most of the art scene in Hong Kong is on the island. There were a lot of galleries here, so I spent the morning exploring them before meeting with Andrew. For the most part, the galleries were carrying work of living artists from Asia. What was the surprise here? I could have been in Taos or New York or London or Osaka. While there may have been some slight differences of style, it is apparent that artists around the world are producing work that is emerging from the same set of influences.
This is unlike the wood block prints of Takeshi Uemura or the brushwork of Yang Shen-sum, which come from different and unique traditions. And, unfortunately, it appears that in the process many of the fundamentals of art have been lost or forgotten. It was a good thing I met later with Andrew. 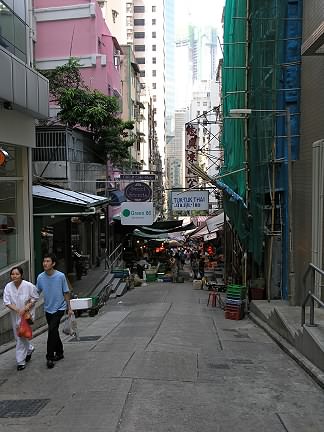 Andrew met me at the Fringe Club, a center for artists and the arts. He lead us on a walk at a quick clip in the afternoon heat of Hong Kong around the back roads to the out-of-the-way fruit stalls and antique dealers. The whole way Andrew gave me a short history of Hong Kong. Finally, we stopped for a glass of yin yeung, an iced drink of coffee and tea (really good) before we headed off to the University of Hong Kong Museum.

I had thought we were just going to see the collection at the Museum, which contained a fair amount of Japanese Ukiyo-e prints. What I had not expected was to be introduced to the curator of the Museum, Ms. Tina Yee-wan Pang. Tina and I chatted about the exhibitions she curates and what she likes in art. It was good to hear about her very high standard for the quality of the shows. Catalogues from the exhibits contained work that showed a depth of knowledge of painting. In particular, one recent show was of paintings from artists at the China Academy of Art in Hangzhou, the premier art school in China. The school is a bus ride away from Shanghai where I will be on the next part of the trip. Visiting the school is now top of my list of places while there.

A big thanks to Jan, Andrew and Tina.

Next: The City of Singapore