Since getting more painting supplies was the main reason for me to stop in Kuala Lumpur (KL), I thought I would see a couple of galleries and leave quickly. As it turned out, KL had much more art than expected.

A few friends from home had given me the names of a couple of people living in Kuala Lumpur. The first person I contacted, Ginny Bieberich, happened to be in Oregon at the time I was in KL. Ginny did email me a list of art places to visit and, coincidently, I was staying only a block or two away from several of them. One nearby gallery was the Artrageously Ramsay Ong Gallery, which had a variety of artwork from Kuala Lumpur and Sarawak. A little further away was the National Art Gallery of Malaysia. The most inspiring work here was a photographic exhibit by Ralf Tooten. All the images were monochromatic portraits of major spiritual leaders from around the world such as the Pope John Paul II and the Dalai Lama, accompanied by a quote from each person. It was a really well done show and very thought provoking.

Another friend of mine living in California, Sean Yiu, had given me the name of his brother, Leonard, who owns the Art House Gallery. I spent quite a long time visiting with Leonard and his father Hong, at their gallery in downtown KL. We talked about the art in his gallery and the current art situation in Malaysia, which is recovering slowly from a major downturn that began in the 1990’s. 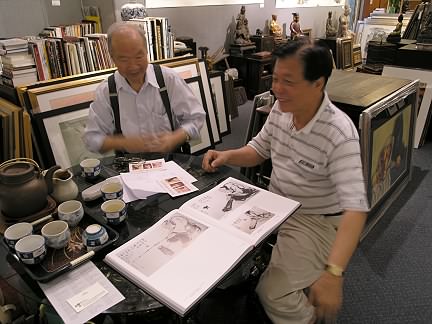 While I was there, another painter, Chung Chen Sun, stopped in. As it turned out, Chung is one of the most celebrated painters in Malaysia, has books published of his work and is collected by the most noted art buyers there. The majority of his paintings are traditional Chinese brush and ink paintings. However, he had applied this approach with oil paints and brushes to achieve some very interesting results. Our conversation about his work was even more fascinating. He spoke about the paper or canvas and the Eastern view of this as part of the painting, not just a support for the medium. As he explained, the white or toned surface was not just empty space rather it was the land, or the sky or the water, just very simply stated. He contrasted this with the usual western approach of covering every square inch of the canvas with paint. For me, this was great information and more of what I came to find out about on this journey. 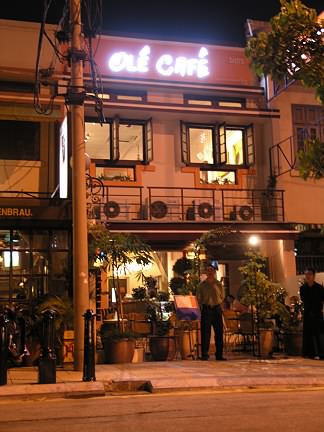 The surprises continued. On my last day in KL, I decided to get a cup of coffee at an internet cafe around the corner from my hostel. The Olé Cafe, as it is named, has great coffee and free wireless service. ‘A good time to catch up on email’, I thought. While I was drinking (a cup of really good coffee) and writing, the manager, Christopher Quay, came over and started to chat. He told me that the Olé Cafe had been opened not too long ago and that its main theme was, you guessed it, art! Of course, this lead to an extended conversation which carried on for hours. Each month, the cafe puts on a new painting show and is constantly looking for new work and new ideas for them. He brought me upstairs to see the current exhibit, which included some modern work and some more traditional figure painting. The work was good and the space was great. Hmm… I wondered, a good space for a Taos Society of Portrait Artists show?

Many thanks to Ginny, Sean, Leonard, Hong, Chung and Christopher.